I'm still sifting through public records that I have collected over the past few months, and I came across an interesting letter written by Doug Copley, a Tremco rep for the Fort Wayne area, that was addressed to the Executive Director of the Northern Indiana Educational Service Center.

Apparently, questions were raised about the AEPA bidding program, which led me to an article that appeared in the South Bend Tribune. The article was titled, "Bidding process saves P-H-M $75,000; Penn High School roofing bid chosen by state service center was higher," and it appeared in the August 10, 2006 edition of the newspaper.

"After a spring of budget cut discussions, Penn-Harris-Madison School Corp. board members received some good financial news at their meeting Monda," began the article written by staff writer Erin Miller.

"Board members voted in July to seek local bids for a roofing project at Penn High School, instead of using bids collected by a state service center for similar projects. The move saved the corporation some money."

"We felt that the state-authorized bid was too high," said Tom Hartman, director of facilities. "By bidding this way, we can save about $75,000."

This is an example of how school officials should be doing their jobs. The school board for this school district were doing the jobs they were elected to do, and Mr. Hartman should be commended for his excellent discernment.

The reporter was wrong about one thing, though. There was absolutely no "state authorization" for the illegal bidding process.

Tom Hartman, the director of facilities, made a very wise decision, and likely spared his school district from a potential liability risk had the school district opted to enter into a contract with Tremco by using the illegal AEPA bidding scheme.

You can read Tremco's spin/response to the article below. Click on to enlarge. 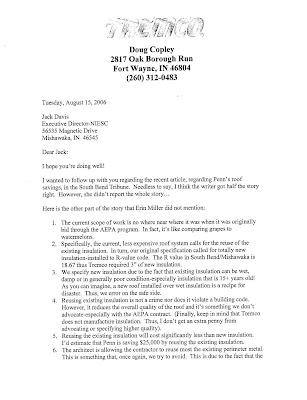 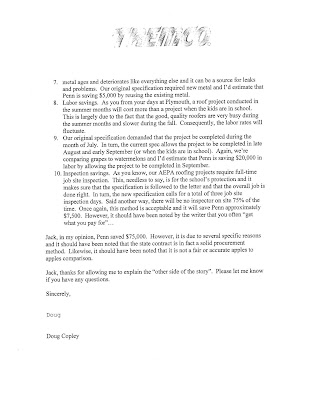