Remember the alleged legal opinion that Plymouth School Superintendent Dan Tyree claimed to have obtained from an Indianapolis attorney stating that school officials complied with legal requirements when they purchased $400,000 worth of roofing materials without going through a required bid process?

You know, the one that a private citizen asked for and was told to "kiss off" by school board attorney Ed Ruiz after he told her "don't fucking preach to me."  He's also the same attorney who told her she would not receive the letter because it was protected by attorney-client privilege.

That so-called privilege doesn't matter anymore, because the letter has been leaked to the public.  It's no wonder Ed and the boys didn't want the letter released.  It's quite revealing.  The letter, dated February 15, 2011, speaks about concerns I raised on my blog, which raises serious questions since I posted my first story on the Plymouth controversy about a month after the date the letter was supposedly drafted.

Some taxpayers are speculating whether officials may have engaged in a cover-up to hide the fact that they violated state bidding laws when they purchased $400,000 worth of roofing materials that could have been purchased for about $100,000.  In addition to the date discrepancy, Superintendent Dan Tyree has changed his story about the controversial purchase to this blogger, stating that he made a mistake when he first discussed how the purchase was made.

Ruiz's letter states, "It is my opinion that the Plymouth Community School Corporation is in full compliance with the statutory requirements to procure materials valued under $150,000.00 via requests for proposals.  It is also my opinion that the law clearly supports the practice of bidding out the three schools separately rather than requiring all three schools be lumped together as one single project."

Now, there's a hefty admission, folks, since it reveals the fact that school officials are now trying to break the purchase up into three separate invoices in order to circumvent public bidding laws.  The only problem with this is the fact that two of the projects exceed the $150,000.00 no-bid limit, which Ruiz readily admits.

I hope Ruiz didn't charge taxpayers for this flawed legal advice since he knows full well that the law doesn't allow for overages in any amount.

The overages also aren't as small as Ruiz claims.  Materials for the Plymouth High School totaled $159,586.95 while the total for the Lincoln Middle School project amounts to $163,752.50.  Perhaps Ed Ruiz should take a couple of refresher courses in legal ethics and Math since none of this is acceptable to taxpayers.

Ruiz also claims to have spoken with legal staff at Ice Miller to obtain a second opinion.

"As you recall, this is the firm that prepared the lion's share of the paperwork involved in this project," wrote Ruiz.

I would advise Plymouth taxpayers to make a request for this "paperwork" since Ice Miller knows full well of the controversies surrounding this no-bid process as they were involved as Tremco's attorneys when it received full public scrutiny a few years ago.

Perhaps the most laughable advice provided by Ruiz was when he stated that "Ms. Vice has successfully campaigned with the Attorney General's Office in Indianapolis to either investigate or audit other school corporation projects and question expenditures.  It does not appear she has had much, if any success."

Really, Mr. Ruiz?  You don't call the 2008 official opinion of the Attorney General a success?  That opinion stated that it was illegal to circumvent the public bid process when it comes to school roof jobs.

What are you really saying, Mr. Ruiz?  Are you saying that since no one was punished for the crimes they committed, it's okay to circumvent the bid process?

Ruiz also wrote that I lacked legal standing to file a lawsuit against the school district, but that I could convince local citizens "to undertake this task and expense."

That's already being discussed, Mr. Ruiz, but I didn't have to encourage it.

Ruiz was dead wrong when he wrote that I had "no history of going this far against any school corporation."  Wrong again, Mr. Ruiz.  I sued my school district for violating bidding laws, and you can bet they will never forget what they went through for breaking the law.

Ruiz closes the letter by saying that "At no time, to my knowledge, did anyone stand up and contest this project.  Therefore, I believe any person who now would come forward to challenge this project has already waived their right to do so."

Wrong again, Mr. Ruiz.  I warned your superintendent about the illegality of entering into a no-bid contract of this nature in plenty of time for him to change course, and I have the emails to prove it.  I'll gladly provide them as evidence to any Plymouth taxpayer who would like to mount a challenge to the laws that have clearly been broken and the hundreds of thousands of tax dollars that were foolishly wasted.

Plymouth taxpayers likely can't count on their local prosecutor to investigate this matter since he has already blocked one citizen from exercising her constitutional right to petition her government for a redress of grievances.  I've been told that this same citizen has also been blocked from petitioning school officials for a redress of grievances as well.  I guess they respect the constitution about as much as they do your tax dollars.

It's time for a federal investigation, don't you think?

Here's the letter that Ruiz and the boys didn't want you to see.  Click on to enlarge. 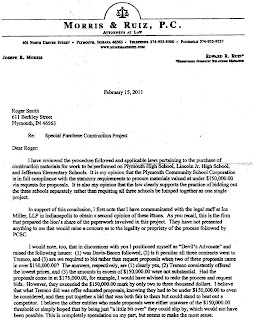 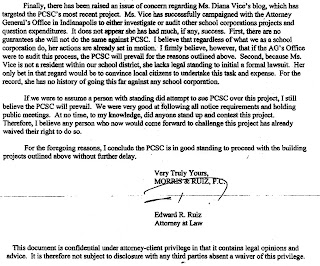