Are Mainstream Media Reporters Being Intimidated From Reporting on Lugar's Alleged Voting Fraud?

Sometimes the story behind the story is more interesting than the story itself.  Attorney and fellow blogger Paul Ogden touched on it recently in a  post when he reported allegations that Barnes & Thornburg attorney Peter Rusthoven "went ballastic" during a meeting with a Fox59 reporter who had considered breaking the story that Senator Richard Lugar allegedly committed multiple counts of perjury and voter fraud.   Ogden wrote that the reporter was so shaken by Rusthoven's outburst that she decided not to pursue the story further.

Also worth noting is the mysterious disappearance of a news story that was published via the Indianapolis Business Journal's website.  According to a regular IBJ reader, the subject of Lugar's alleged voter fraud made recent headlines on the IBJ website; however, it was removed later the same day.  One has to wonder if the political thugs had connections at the IBJ or if similar intimidation tactics were employed to secure its removal.

Apparently, the story that Lugar claimed via an Application for Absentee Ballot that he lived at 3200 Highwoods Court in Indianapolis is too much of a political hot potato for media elites who are sometimes mistakenly believed to be watchdogs for the people.

The real owner of the former Lugar home, Elizabeth Hughes, was surprised to hear that the senator and his wife were claiming occupancy of a home she had full ownership of and had lived in for years.  Did anyone except for the fraud investigator think of contacting Ms. Hughes for a comment?

Why the news blackout?  Are Lugar's political cronies ramping up their intimidation efforts in defense of the powerful senator?     Based on numerous hits this blog received from around the country after the subject was first raised, there is certainly ample interest that Senator Lugar may have committed voter fraud and perjury.

To date, the only mainstream news publication reporting on the story is the Fort Wayne News Gazette.  You can find the story at this link.

Ogden went on to report that Lugar admits that he doesn't live at the house.

"He stays in hotels when he comes back to Indiana. Yet when Lugar and his wife have voted, they continue to sign voter absentee and other forms UNDER OATH that they live at the Highwoods Court address. They are voting in the Wayne Township precinct that they haven't lived in in decades."

Ogden, an experienced attorney points out that there is no exception in perjury or voter fraud laws that would allow Lugar to continue these shady voting practices legally.

"As a result, Lugar and his wife have committed multiple acts of perjury and voter frauds, all felonies," wrote Ogden.

If Lugar supporters continue to claim that the senator did nothing wrong, then why are they afraid of airing the details publicly?  Why would they go to such lengths as to allegedly intimidate a reporter from doing her job?

And why are media personnel allowing themselves to be intimidated?  That may be an even bigger story waiting to be broken.

Until such time, bloggers will continue to take the bold lead in reporting what the public has a right to know while the mainstream media becomes even less significant to the masses.

For starters, take a look at Lugar's voter registration form and the formal complaint filed by Greg Wright against Lugar and his wife.  Click on to enlarge. 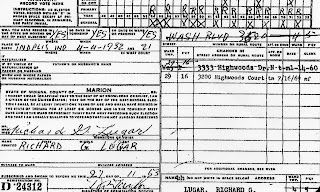 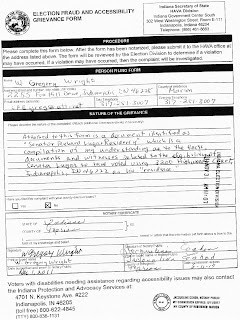 Update:  The National Journal has now reported on this story.
Posted by Diana Vice at 2:09 PM