﻿
﻿ As previously reported, Certified Fraud Examiner and Indianapolis resident Greg Wright filed a complaint with the Secretary of State against Senator Richard Lugar and his wife for allegedly using a phony address for voting purposes.

Wright received an official response today stating that his complaint will be forwarded to the Indiana Election Division to determine if the Lugars violated the Help America Vote Act of 2002 or the National Voter Registration Act of 1993.

"Your complaint has been forwarded to the Indiana Election Division for further review," wrote Vance Poole, Election Outreach Manager for the Indiana Secretary of State's office.

"The Election Division will first determine whether a violation of the Help America Vote Act of 2002 or the National Voter Registration Act of 1993 has occurred, assuming the facts set forth in the complaint are true, and will advise you of that determination."

A copy of the letter was sent to Co-Directors, Indiana Election Division as well as to Senator and Mrs. Lugar.

Wright sent a follow-up request, asking Poole for the address that was used to notify the Lugars.  Will the state officially recognize the phony address that the Lugar's have been using for 30 years for voting and driving purposes, or will they track down the real one? 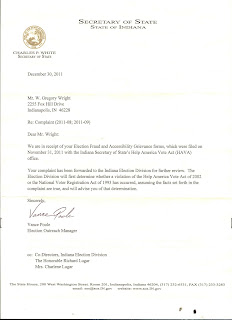 Either everyone is treated equally under the law or Hoosiers do not enjoy a just and fair society.

Seems simple to me.

What's it going to be, boys?

No one in GOP or Democratic party leadership or anyone in the traditional media is going to do anything. No matter what he has done in the past or will do in the future, the Honorable Richard G. Lugar will not be touched!

But, Charlie White is a different story.

It is apparent that Senator Lugar and Mrs. Lugar sold their home in Indianapolis in 1978 and moved to Virginia. I have simply asked the regulators to describe the legal basis that allows them to vote from that address.

I do not know and am not speculating that they may have committed fraud.