Kilpatrick contends that Lugar "does not meet the requirements of Indiana Code 3-8-1-7 to be a candidate for the U.S. Senate from Indiana."

"Indiana Code 3-8-1-7 states that 'a candidate for the office of the United States Senator must have the qualifications provided in Article 1, Section 3, Clause 3 of the Constitution of the United States.'  Article 1, Section 3, Clause 3 of the U.S. Constitution states that among the requirements to be a U.S. Senator are that a candidate 'must, when elected, be an inhabitant of that state for which he shall be chosen,'" wrote Kilpatrick.

Kilpatrick went on to explain that "Federal Courts have generally held that for a candidate to be considered an 'inhabitant' of a particular state a physical presence in the state is required...Lugar is not currently an 'inhabitant' of the State of Indiana and has not been since July of 1977 when he sold his residence in Indiana located at 3200 Highwoods Court, Indianapolis.  He maintains no physical domicile in Indiana and in fact has resided at 7841 Old Dominion Road, McLean, Virginia since July of 1977.  Furthermore, he evidences from his public statements no intention to become an inhabitant of Indiana by November 6, 2012, the date of the general election....

Although Respondent Lugar purports to have an informal 1982 letter from the then-Attorney General of Indiana stating that the Indiana Constitution allows him to continue voting from his former address of 3200 Highwoods Court, Indianapolis, nothing in this letter or state law may alter the federal constitutional requirement that he be an 'inhabitant' of the State of Indiana.  Thus, this letter does not apply to Indiana code 3-8-1-7."

According to an Indiana University law professor, Kilpatrick appears to be right on target.  John Hill, Professor of Constitutional Law told a WIBC news reporter that there is validity to the claim that Dick Lugar doesn't live in Indiana.

"What's interesting is unlike the voting requirements, who gets to vote in the state which are governed by state law, these standards are actually governed by federal law so the Attorney General's opinion is not relevant to this particular question," Hill says.

﻿ The cat is now out of the bag, and Lugar can no longer count on his friends and political allies to cover for him, nor can he count on the Indianapolis Star and other Johnny-Come-Lately local media outlets to quash this story since it hit the national news last week. This issue will not die, and if Richard Lugar should win the primary election, Republicans will be at huge risk of losing Indiana's Senate seat.

The fact that Governor Mitch Daniels and Attorney General Greg Zoeller flexed their political muscles on behalf of their friend, Richard Lugar, will make no difference in the minds of an attentive citizenry, especially in the wake of Charlie White's recent conviction.  The people are paying attention and they know a double standard when they see it.  If the comments left by readers of various Internet news outlets are any indication, this is a huge deal to the average Hoosier.  It simply doesn't pass the smell test.

What Charlie White did was minor compared to the years of voter fraud perpetrated against Hoosiers by Senator Lugar!  Lugar's bold arrogance to think that he is somehow above the law is obnoxious.

If the Indiana Election Division allows Lugar's name to remain on the ballot, they will have made a mockery of the office and the process. They will force Indiana citizens to take their complaint to the courthouse, which will put an even bigger spotlight on the Hoosier state and its corrupt political system.

I imagine that Governor Mitch Daniels and other public officials who are flaunting voter fraud laws themselves are secretly hoping that Charlie White's conviction will be overturned on appeal.  Surely, they understand that the double standards will continue to blare with the public spotlight shining on more egregious offenses, including the fact that Mitch Daniels votes in a precinct where he does not reside.

In the case of Charlie White, justice was not blind.  He got the shaft, and there are political consequences to pay for it. 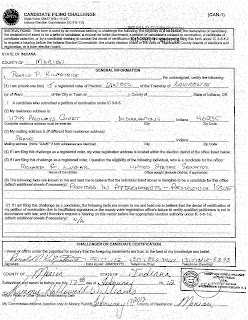