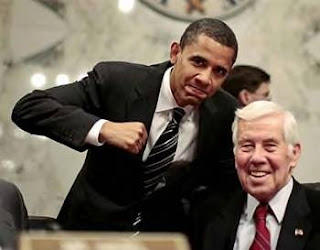 With the election two days away, liberal Democrats are already mourning the historical loss of Richard Lugar to the United States Senate.  The mourners include the writer of the Indy Democrat Blog, in a piece entitled, "This Is It for Lugar."

And why shouldn't this be it for Lugar?  After all, he has no business representing Republicans when he acts and votes like a Democrat!  The fact that liberals are mourning his impending loss is proof enough that it's time for Lugar to go.  Since he wouldn't go gracefully, he had to be shoved off the left exit of the political stage.

"Dick Lugar is among a handful of people who have shaped my ideas and who will be surrounding me in the White House," stated Barak Obama.

Need I go on?  The list of Lugar's offenses is a long one, but we can stop with the fact that Dick Lugar and Barak Obama are joined at the hip.  Dick Lugar is not qualified to represent Hoosier values.

In contrast, Richard Mourdock is a true American patriot who respects the Constitution.  He's down-to-earth, and he's not above mingling with common folks.  In fact, he will be visiting a few close friends in my hometown of Lafayette tomorrow afternoon.

It won't be the first time I've met Mr. Mourdock.  I first heard him speak over a year ago at a Tippecanoe County Republican Women's breakfast.  I remember being so excited after hearing him that I called up a few friends and declared, "This is the man who will unseat Richard Lugar!"  Although they shared my view that it was time for Lugar to go, those friends thought it was wishful thinking on my part.  But that was before they heard the man speak.

I predict that if Richard Mourdock doesn't forget the people who sent him to Washington, he will go down in history as one of the best United States Senators this nation has ever had.
Posted by Diana Vice at 8:06 AM

My post was simply to recognize Lugar for his accomplishments as a Senator. You perhaps didn't read the part of the post where I criticized Mr. Lugar for moving out of state, etc.

Regardless, thanks for the label of "liberal". I will wear it as proudly as you do the label of, "Tea Partier".