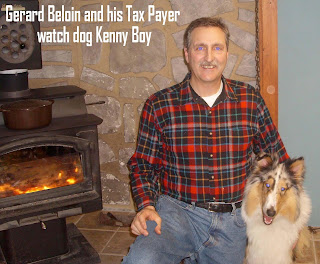 As reported last February, Gerard Beloin has been sitting in a New Hampshire state prison for over a year after blowing the whistle on alleged school roofing corruption in his hometown of Goffstown.  This comes on the heels of a recent Reuters news story that gave the State of New Hampshire a D rating for being one of the most politically corrupt states in the nation.  The incredible plight of Gerard Beloin is proof that it deserves an F.

"There is a sickness, a disease, a perversion in the New Hampshire justice system," wrote Beloin from his prison cell.  "I'm not the progenitor of this madness, I'm simply the recorder and the reporter."

Beloin's supporters are referring to the whistleblower as a "political prisoner" as 2nd Amendment groups and elected officials, including the former Chairman of the New Hampshire Republican Party, are now jumping on board to help in Beloin's plight for justice as the news makes its way around the country via the Internet.

"He now sits in jail, the victim of a railroad job like no other I have seen," wrote Jack Kimball, former Chairman of the New Hampshire Republican party.  "If this can be done to Gerard, then it certainly can be done to any of us."

Kimball vowed, "Help is on the way and we won't stop until we succeed in getting Gerard back home."

Beloin is crediting Kimball's intervention as well as a story published via this blog, entitled "Is Gerard Beloin a Political Prisoner?" for an unexpected move by the Hillsborough County Attorney to announce via a letter dated April 25, 2012, that he will not be pursing wiretapping charges against Beloin.

Until now, Beloin has been threatened for the past couple of years with wiretapping charges for doing nothing more than recording multiple death threats being made against him, including one warning that he would "disappear like Jimmy Hoffa" if he did not stop speaking out against the corruption of elected officials.

"Our office has decided not to prosecute you at this time for wiretapping. Therefore, you are free to make arrangements with the evidence department at the New Boston Police Department to arrange to have your personal property returned to you," wrote Kenneth L. Perkins, the Hillsborough County Attorney.


Beloin's arrest for the phony wiretapping charges led to an eventual arrest and charges for handgun possession.  Had it not been for bogus wiretapping charges, there would be no handgun charges since Beloin was previously licensed to carry a handgun.

Although Beloin had a clean record prior to the bogus charges being leveled against him, an overzealous judge sentenced him to six years in prison where he now sits, even though prosecutors argued for no prison time since it was a first offense.  The judge cited Beloin's unrepentent attitude for the stiff sentence; however, Beloin contends that he has nothing to repent of.  He was merely doing what any prudent citizen would do in the face of being threatened with death for blowing the whistle on massive corruption.

The New Hampshire Supreme Court has agreed to hear Beloin's grievances, which may occur this week.  This blogger and other activists from around the country have filed Friend of the Court briefs on Beloin's behalf.

We will continue to follow this story as well as provide intriguing details in a continuing saga, which is the subject of a tell-all book that Gerard is writing for publication from behind bars, where he is also running for Congress in hopes of drawing attention to his persecution.

If you want to help, please make a contribution or mail a check made out to Gerard Beloin for Congress, P. O. Box 304, New Boston, NH  03070.  Gerard could also use help with legal fees as his wife and daughter have been left without a husband and father to provide for them for the past year.

Stay tuned...this story is an unbelievable one, and I've only scratched the surface.
Posted by Diana Vice at 11:30 PM