Judge Loretta Rush Will Serve the Supreme Court with Honor 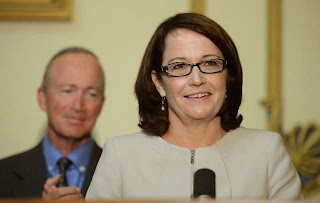 Governor Daniels made a wise choice when he appointed Judge Loretta Rush to the Indiana Supreme Court today.  As a CASA, I have advocated for abused and neglected children in Judge Rush's court for several years, and she is, by far, at the top of my list when it comes to public officials who have earned my complete trust and respect.

Along with her common sense, she has many outstanding qualities, but the one thing I admire most about Loretta Rush is the fact that she is not afraid to stand up for what is right in spite of political consequences.

Unlike some juvenile judges throughout the state, Rush is clearly not a rubber stamp for the Department of Child Services.  Rush recently appeared before the state legislature and gave clear and concise testimony about serious flaws in the system while she was being considered for the Supreme Court.  The constructive criticism was risky, politically speaking, but Judge Rush stood by her convictions, and she did so, because she knows what is at stake, and she understands that lives may depend on her intervention.

As a CASA, I have only seen a small glimpse compared to what Judge Rush has seen.  Knowing that, I don't know how that woman sleeps at night.  I also know that the Department of Child Services has serious problems, and I applaud her for wanting to fix what is clearly broken.  Sometimes, I feel like my role is to protect children from the system rather than abusive parents, so I can only imagine how she wrestles with all the problems she is faced with.

While Rush's departure will be a huge loss for children in Tippecanoe County, her appointment as Supreme Court Justice will benefit all Hoosiers.  With a huge lump in my throat, my heartfelt congratulations to The Honorable Judge Loretta Rush, a woman I truly respect and admire.
Posted by Diana Vice at 2:36 PM

Welcome back! You have been missed.

Thanks for the marvelous posting! I definitely enjoyed reading it, you could be a great author.

I will make certain to bookmark your blog and will
often come back from now on. I want to encourage yourself to continue your great posts, have a nice holiday weekend!
Also see my web page :: Click This Link