This is a must read.

Click this link to read a powerful analysis.
Posted by Diana Vice at 2:57 PM No comments:

Duneland Superintendent Has His Facts All Wrong!

Dirk Baer, Superintendent for Duneland Schools, attempted to defend his school district to a news reporter of the Chesterton Tribune regarding the negative audit results for his participation in the Tremco/AEPA no-bid scheme. Are you kidding me, Dirk? I didn't think there was anyone left defending the illegal scheme that has been the subject of intense controversy throughout the state for the past few years. No one is buying into the false assertions that this illegal scheme has saved a single tax dollar. Quite the contrary!

Excerpt from Page 25..."By convincing school officials that the WTI [Tremco] general contracting process and the AEPA/Wilson line-item contract would enable schools to save money on Tremco roofing materials and avoid public bidding requirements, WTI [Tremco] was able to charge for Tremco roofing materials, services and equipment it never provided to the schools. WTI [Tremco] was also able to charge exorbitant prices for other roofing materials, services, and equipment. WTI's excessive and fraudulent charges are particularly egregious in light of the school board's obligation to obtain the "best possible performance at the lowest price..."In the handful of projects discussed above, WTI [Tremco] charged $662,366.28 in excess of its subcontractors' charges for completing the projects. Further WTI [Tremco] charged at least $165,533.24 for materials, equipment, or services WTI [Tremco] falsely represented would be provided at the projects..."As set forth above, Tremco - either independently or in concert with its affliate, WTI - has engaged in numerous acts of inequitable and unlawful conduct. Consequently, Tremco cannot enforce the covenant not to compete, and Baker should be awarded summary judgment."

I think taxpayers for the Duneland School Corporation deserve to know the truth, and this is only a glimpse of what has been going on behind their backs. Perhaps they should be invited to read through the archives of this blog. I'm sure it will be a real eye-opener for them as they learn that their superintendent was not only too lazy to submit to a legal bidding process, but that he is also terribly naive.
Posted by Diana Vice at 8:12 AM No comments:

On April 22, 2009, I published a blogpost entitled, "Bidding Process Saves Penn-Harrison-Madison School Corp. $75,000, and included a copy of a letter written by Tremco sales rep, Doug Copley. Apparently, Copley's letter ruffled a few feathers in the roofing industry, and one Registered Roof Consultant decided to address the claims made by the Tremco rep.

I am a Registered Roof Consultant and have been in my own practice since 2000. Prior to starting my consulting business, I worked as a roofing contractor for twenty-five years. I have included Tremco products as an option in my roof specifications for many years and have yet to have a contractor use their materials, mostly because the products are not cost competitive.

I was reading the Welcome to My Tea Party website last week and ran across a letter written by a Tremco material salesman that was sent to the Executive Director of the Northern Indiana Education Service Center. The letter was in response to an article published in the South Bend Tribune in 2006 indicating a local school system had saved $75,000 by not using the AEPA system and offering his “other side of the story”.

In his letter Doug Copley from Tremco claims that the savings on the project was due to:

He implies that the AEPA scope was a higher quality specification and also claims that Tremco does not make a profit from insulation sales.

On the surface this sounds like a reasonable argument if you are not very knowledgeable about roofing. His premise falls apart when you understand the following:

· The only difference in the scope of work that he describes is the re-use of the insulation and perimeter metal. He alleges that the existing insulation could be wet and calls it “a recipe for disaster.” The truth is that re-using insulation is a common and acceptable practice as not only does it cut costs but makes good ecological sense to reuse perfectly good materials with no reduction in quality to the roof system. Proper analysis of the existing roof prior to installation of the new system would reveal whether any wet insulation is present and should be replaced. We are also aware of previous AEPA/Tremco projects that have called for the re-use of insulation and metal.

· I do not see a big difference in completing the project in late August or early September as most schools are heavily used during the summer for all types of programs. I find his assumption that much of the savings ($20,000) is directly related to the time frame of the project rather than material costs to be farfetched and pure conjecture.

· I also find the statement that “…Tremco does not manufacturer insulation, thus I do not get an extra penny for advocating or specifying higher quality” to be quite a spin. The AEPA bid sheet filled out by Tremco has bid item lines for demolition of the existing insulation, and the installation of new insulation. These line items are based on the thickness of the insulation to be removed and the thickness of the insulation to be installed. Seems to me Tremco makes a lot of money for this maneuver, but maybe the writer personally does not.

The Tremco letter is typical of the “smoke and mirror” sales approach to clients that are unfamiliar with the roofing industry. Tremco and other proprietary manufacturers go to great lengths to hide the true cost of their products and the AEPA structure provides plenty of cover for this concealment. Even very knowledgeable school personnel would have difficulty discerning the fairness and accuracy of the 371 unit prices in the AEPA bid and how they are applied to an individual project.

Ultimately the complexity of the AEPA process obscures the cost of roofing. Standard manufacturers have been shut out due to the scope of the AEPA bid. In the first 10 years, only 3 other companies have presented competing but unsuccessful bids.

The school officials believe they are saving money because Tremco tells them they are. Tremco provides incentives to the service centers to promote the roofing program in the form of the “rebate” checks going to the service centers. I have no doubt based on my years of experience as a contractor and now as a consultant that the conventional open bidding process would provide lower cost roofing to the schools.

The State Board of Accounts issued an audit report last Friday that proves what I've been saying all along. Roofing projects purchased through the Wilson Education Center and "contracted" through Tremco, Inc. are illegal.

The State Board of Accounts issued a scathing audit report for the Duneland School Corporation and cited the school district for page after page of misdeeds, including purchasing $5,314,338.00 worth of roof jobs with Tremco for three schools between 2005 and 2008, and according to the report, all this was done without a contract!

"Duneland School Corporation did not bid the project; instead the materials were purchased through the Wilson Education Service Center," read the report.

Surprisingly, there wasn't even a contract according to the report:

"We noted that the invoices from the vendor were an 'Application and Certification for Payment' Form which is used by Contractors performing public works projects. The invoices include the original contract price, and the amount being requested on the contract to date; however, School Corporation officials could not provide a contract. Additionally, the form allows for the architect, who is hired to oversee the project, to certify the amount paid. This portion of the form was not filled out, as an architect was not employed by the School Corporation to oversee the progress. Furthermore, the claimant or contractor was Weatherproofing Technologies, INc., for some of the claims reviewed; however, the checks were made payable to Tremco, Inc."

There are other serious citations in the report, which warrant detailed public scrutiny.

Duneland School District officials are not innocent victims in my humble opinion. There were serious questions raised long before these no-bid, no-contract roof jobs were initiated. The fact that the Rossville School District was cited years earlier should have been enough to cause these school officials to think twice about engaging in illegal activity that had been the subject of controversy.

Taxpayers deserve restitution. Duneland Schools was only one of many school districts that engaged in the illegal activity throughout the Hoosier state. The impact on taxpayers is staggering, and to think this has been going on for several years is almost too much to comprehend!
Posted by Diana Vice at 6:59 AM 1 comment: 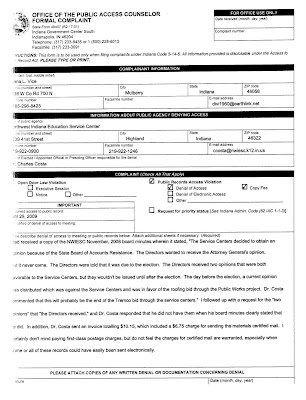 Posted by Diana Vice at 6:28 AM No comments: